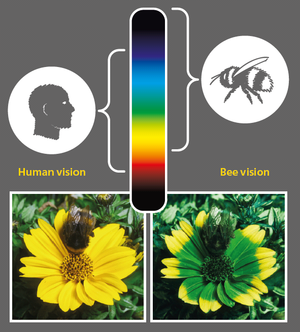 With daylight hours shortening and temperatures beginning to drop, growers in the higher latitudes of the Northern Hemisphere are paying special attention to their growing lights. High time to focus on the effects this can have on the pollinators doing their job in your greenhouse! Koppert Biological Systems has just brought out a useful manual and informative poster that feature its best practices with regard to pollination under artificially lit conditions.

As one of the world’s biggest breeders of bumblebee species, Koppert Biological Systems’ R&D department has gained in-depth knowledge of this pollinator’s behaviour under a wide range of conditions and climates. Its Natupol hives are under continuous development and feature the latest innovations for optimal pollination of greenhouse fruit and vegetables. The best practices and advice it now shares with growers is based on more than 30 years’ experience in the field and valuable growers’ feedback. The eight-page manual on 'Pollination and Growing Lights' gives advice on when to open and close hives, the best placement of hives, the benefits of its ‘Bee vision’ innovation, and influencing factors such as coatings, screens and filters in greenhouses that may inadvertently restrict light. It even informs you how to respond in the case of a snowfall, for example.

As a growing knowledge company, sharing the latest research results and accumulated advice through its more than 200 consultants worldwide, as well as sharing regular news online and in the mainstream media, is one of Koppert Biological Systems’ core values. The manual which features research results that are presented graphically, also offers guidelines so that growers are able to avoid some of the pitfalls when it comes to installing and operating hives in their greenhouses. Useful illustrations make this manual easy to follow and put into practice.

‘We hope that the guidelines we offer in the manual will ensure that our growers get the best performance out of their Natupol hives,’ says Anne Mathijssen, junior product manager. ‘We have looked at all the features on the hive and give advice on how to enhance the work of our bumblebees in poor (day)light conditions. We hope that our growers are going to make good use of our advice so that their crops will benefit.’

When growing lights were introduced into greenhouses in Europe towards the end of the last century for growth at night and prolonged production during the winter, researchers at Koppert Biological Systems and growers observed that the bumblebees did not achieve effective and consistent pollination under these conditions. They found that artificial lighting often led to rapid deterioration of bumblebee colonies. The company has been finding solutions to these problems ever since.

The first hive innovation was the introduction of the ‘Wireless Beehome’ system in 2005 which ensured that bumblebees only flew at moments when there was sufficient daylight. The next innovation came in 2010 when Koppert Biological Systems solved problems concerning hive placement and introduced best practice advice. In 2015 it began to support a horizontal hive placement system by Metazet for optimal placement under artificial light. It then continued to investigate bumblebee navigation in artificially lit greenhouses and its effect on bumblebee behaviour from 2010 to 2016. The research during this period demonstrated that poor visibility of the bumblebee hive impacted negatively on pollination. The ‘Bee vision’ innovation improved bumblebees’ orientation capacity by 12%  in 2017. The company’s R&D department is hoping to announce a new feature to their Natupol range before the end of this year.